Are you looking for a good book to read? I suggest Sarah’s Key. It’s about a little girl who locks her brother in a cupboard, one where they liked to play because it was hidden in their home… like a secret.

She locked him away in the depths of their house with a large heavy key. Similar to what you might see on a round metal ring. These old fashioned keys are history now, history like the secrets some of those keys locked up back then. Ugly little secrets… the kind you want to forget but seem to haunt you relentlessly – and maybe they should.

It takes you back- the long heavy key, back to when doors were cumbersome, solid wood – back to when everything was clumsily weighted, and a bit on the slower side- like communication. People often got the news late. It wasn’t like you could be updated every minute on twitter. Details were often missing. Rather than too many opinions and interpretations or too many facts and commentaries, there were obviously not enough. For had there been enough, surely history would read a little differently, would indeed have happened a little differently. One could hope A LOT differently.

In our past world events were once looming heavy but learning about them – hearing the details, actually understanding what was going on, well, that was like the hidden cupboard. A place where the wall panels were so perfectly aligned you could never discover what was behind them without someone specifically showing you.

How can that be, you say? More to the point, how could everyone let those world events happen if they weren’t more of a secret that not? Let’s use the Holocaust for example. That’s the subject in Sarah’s Key – half of it at least – the half that isn’t about her own personal family and family struggles. But whichever half you are reading it IS about difficult everyday human decisions that affect, well, lots of people’s lives. Affect them in a close up, intensely personal way, rather than a distant whole world away kind of way.

During WW2, Jews were rounded up in France and shipped off on cattle cars to their death, while neighbors peaked curiously from behind window blinds, wondering, perhaps some of them worrying, but not knowing. Not knowing their Jewish neighbors were being sent to their death, or why. It was like a secret.

The Jews in France were, obviously, French Jews. They were rounded up by the French police (of course) or does that really make sense? Would one expect the French to gather their own French people for another country’s insane beliefs? To this day France is not sure why French police were rounding up French Jews for Hitler. What they are sure of is that it never should have happened. It is a permanent blemish on their country’s conscience.

As well it should be. 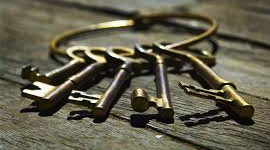 And that’s just part of what Sarah’s Key is about. As for Sarah and her family, and concerning the little boy in the cupboard, I suggest you carve out a couple days to hide away somewhere – locked up with a large metal key… and read!

If you have read Sarah’s Key, what did YOU think? I would love to hear from you.

Kathryn is the author of Benjamin, available at all major booksellers.